The History of Gillett & Johnston 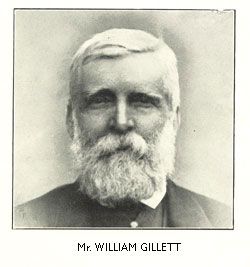 William Gillett was the founder of the firm.  He first began as a clock maker in Hadlow, Kent under the patrionage of Lord Sackville-West.  He then moved to Clerkenwell, London and from there to Croydon where he established his business in 1844.

Charles Bland became a partner around 1854 and brought his considerable skills as a salesman to the company and it was through his influence that turret and public clocks were first introduced to the business.  The company was one of the first steam-powered clock factories in the world and in 1868 the well known clock tower at the factory was built as a working advertisement. 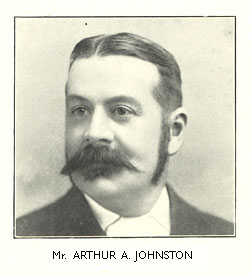 Arthur Johnston bought a partnership in the firm in 1877 and the firm became known as Gillett, Bland & Co until Charles Bland’s death in 1884 when the company name was changed to Gillett & Co.  During this time the business was further extended with the development of the Bell Foundry as there was a need to supply bells for the clocks.

The title Gillett & Johnston appears to have been used from around 1877 onwards and it was during this period that Arthur Johnston took over full control of the foundry. 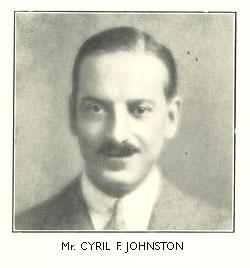 Cyril F Johnston joined his father in the business in 1902 and was made a partner in 1907.      In 1905 the earliest tuning machine was installed and by 1909 Cyril’s skills in bell tuning were already being noticed.  He first began to take an interest in Canon Simpson’s theories of tuning at the age of 22 and carried out many experiments before perfecting his own method of tuning.  It was during these years that Cyril perfected the lost art of tuning bells and his method is widely acknowledged to be the finest in the world.

During the first World War, the factory installed suitable machinery and was involved in the manufacture of munitions.  An extension was soon necessary as the output rose to nearly 40,000 fuses per week which required the employment of over 1,250 men and women working both day and night.    After the signing of the Armistice the plant was restored to it’s peacetime occupation and the extra space developed to support the war effort had specially designed machinery for bells, Turret and small clocks installed.

Between 1844 and 1950 more than 14,000 Tower clock installations were manufactured at the Croydon factory.  In 1925 the company became known as the Croydon Bell Foundry Ltd and in 1930 the name changed again to Gillett & Johnston Ltd.

In 1948 Cyril Johnston resigned as Managing Director of Gillett & Johnston over a matter of policy and in 1958 the bell founding side of the business was sold to Cope Allman International and the clock section was bought by Synchronome. 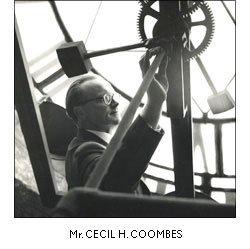 Cecil Hector Coombes worked for Gillett & Johnston for many years – during World War II in the drawing office and eventually becoming Overseas Marketing & Sales Manager.  In 1962 Cecil bought the business and returned operations to Croydon.  The business soon outgrew the first premises and relocated to Sanderstead Road where the business continued to thrive, carrying out clock and bell work both at home and overseas.

On Cecil’s premature death in 1972 the business was managed by his widow, Doris Coombes, and upon her retirement in 1976 her son Stephen Coombes became Managing Director, which position he holds today.

Stephen joined his father in the business in 1964 after completing his engineering training and his experience covers clocks and the rehanging of bells, both here and abroad.

Gillett & Johnston is very much a family business, with Stephen’s wife Jenny and their daughter Sophie and her husband Gerry helping in the business. In 2012 the company moved to new modern premises in Bletchingley, Surrey where they continue to carry out the manufacture, maintenance and service of both clocks and bells for distribution throughout the UK and abroad.

Please contact us to see how we can help you.