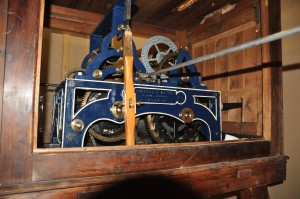 In 1877 Gillett & Bland received an order from a H. Kohn and Co of 93 Leadenhall Street, London to supply a clock & Bell to be packaged up and delivered to any of the docks in London for transportation to New Zealand.  The count wheel to be inscribed with B. Petersen, Christchurch on it.

A lot of clocks that were made by Gillett’s were actually branded with the buyers name at their request to make the clock look like it had been made by them.  William Gillett before he started Gillett & Bland made his living making clocks for the trade and for many years “his principle customers were Sir John Bennett of Cheapside and of wide notoriety and the late Mr Benson, of Ludgate Hill” as told in the  Croydon Advertiser dated 11th October 1879.   For many years Gillett’s also made and supplied all Dent’s tower clocks.  The most notable of the clocks being –

The Arts Center clock was installed by B Petersen at the then Boys school where it kept time for many a lessons under the careful care of the clock minders.  On looking into the name of Petersen I found in the New Zealand, Evening Post dated 13 September 1883 an advertisement was placed for Kohn & Co of Lamberton Key, Wellington a Jeweler and watchmaker by special appointment to his excellence Sir Arthur Gordon.  Who also had branches in the following –

It maybe of interest that leadenhall street was also the home to the East India Companies head office.

It was not until after the tragic events of 2010 & 2011 when Canterbury was hit by a series of catastrophic Earthquakes that Gilletts heard any more of the clock which had had to be removed for the first time in 134 years due to the clock tower being unsafe.  Luckily the clock and bell survived the quake.

The school now known as the Arts Center  is in the process of a 7 year restoration programme the biggest in the world today and costing $290 million.   Gillett’s were delighted to be asked to restore the historical clock and bell and to upgrade to modern winding methods so no manual winding of the clock is needed in the future.

We have been working on the clock and bell and in March 2015 we are happy to report the clock and bell were brought back to life for the first time since the earthquake and returned to working order.  The restoration project still has a long way to go but with the Bell striking again we believe a huge milestone in the restoration has been reached.

The clock is, unusually for Gillett’s, painted in Blue and Cream for maybe the school colors.  In looking into the clock case names of past residents are scratched into the case.  There is also evidence of candle wax presumably from the clock winders pre electricity.

10.  Between 1874-8 there were 7 orders placed by Cohn & Co mainly for wall clocks for Government buildings like post offices and stations all with the different branch names of Cohn & Co.

For more information about Gillett & Johnstons or for a free no obligation quote please call us on 01883 740000 or, if preferred use the contact form.