Mr Coombes is a member of ‘The Worshipful Company of Clockmaker’s’ and as a member has been granted Freedom of the City of London.

Mr Gaylor drove Steve & Jenny in Grand Style in his 20/25 Classic Rolls Royce to Squerrys Court for 10am where coffee was followed by a private tour of the house.  Squerrys court is a beautiful 17th century manor house which has belonged to the Warde family since 1731.  The house has been used for filming for TV Shows like the BBC’s adaptation of Emma and Channel 4’s Made in Chelsea.

After touring the beautiful rooms and grounds of Squerry’s the Rolls glided through the beautiful English countryside to Tandridge Gold Club.  The course was designed by the celebrated architect Harry Croft and has the most beautiful views of the surrounding countryside.  Jenny & Steve being keen golfers enjoyed the tour and wonderful lunch provided whilst looking out on to the North Downs.

The final destination was The Titsey Estate which is one of largest surviving historic estates in Surrey and dates back to the mid-sixteenth century.   The clockmakers guild members toured the house and  grounds before enjoying afternoon tea.

Everyone else at Gillett’s enjoyed a busy Friday followed by squashed home made sandwiches and instant coffee followed by a commute home in a car nothing like a Rolls, not that we are jealous. 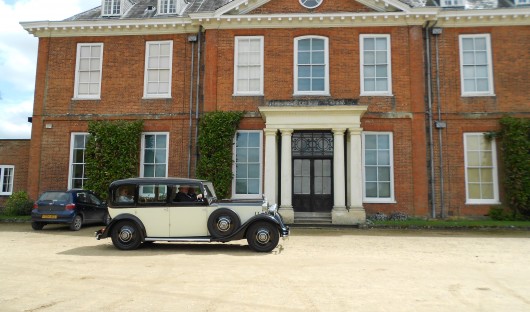