In May 2012 Coventry Cathedral held a Flower Festival, entitled The Power and the Glory to celebrate the 50th Anniversaries of both the New Cathedral and NAFAS South Midland.

The special 4 day event was to commemorate the artists and craftsmen and women who have contributed to the Cathedral which is among the finest in the country.

There have been 3 cathedrals in Coventry in the last 1000 years.  The first being St Mary’s which went into decay after the dissolution of the monasteries in 1539.  In 1918 the modern diocese of Coventry was created in its own right and the church of St Michael became it’s Cathedral.  Then on the night of the 14th November 1940 Coventry was bombed by the Luftwaffe.  The cathedral was hit by several bombs and a fire spread throughout the Cathedral.  The decision to re build was made the very next day but not to re build the old Cathedral rather to preserve the ruins as a reminder of the destruction of war and build a new cathedral next door.

The new cathedral was seen as an inspiration for artists and a flower show to celebrate these artists in the cathedrals Golden Jubilee seems a fitting tribute.

Gillett & Johnston originally cast the cathedrals 10 bells in 1927.  The tower and bells miraculously survived the bombing of WW2 and is the only part of the cathedral that was left unharmed.  The bells were re hung in 1987 where they still stand to this day.

Gillett’s also maintain the clock and according to Gillett’s employees very closely.  In the 1950’s one of our engineers was attending to the clock and somehow managed to get himself wedged between the clock and the clock case. It was touch and go as to whether the clock case would need to be dismantled to extract him but luckily he managed to wrangle himself free.  Apparently clock oil can be used for numerous tasks.

We were honoured to be asked by the Cathedral to support the Flower Festival with a display arranged by Jean Carter and Margaret Smith.  The Cathedral covered in flowers really does seem to prove that Coventry Cathedral is a living Cathedral.

For more information about Gillett & Johnston Bells & Carillons please call us on 01883 740000 or, if preferred use the contact form. 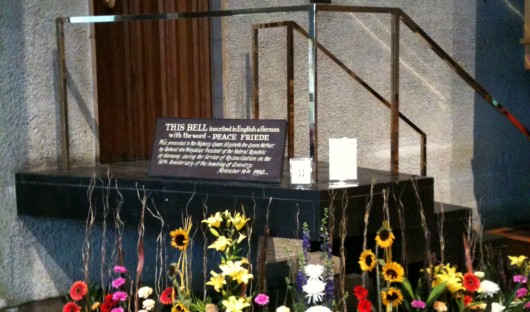