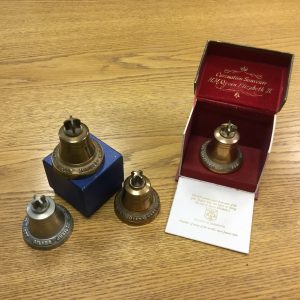 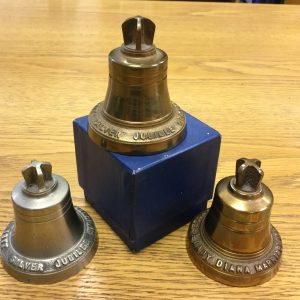 We are often asked for information regarding the small bells that were cast by us in 1953 for the Cornoation of Queen Elizabeth II.

The Bells were sand cast and measured 2.75″ tall by 2.5″ in diameter and had the wording ‘Coronation of HM Queen Elizabeth II 1953’ cast around the base of the bell.

There were approxiamately 1,000 bells cast in all and they were sold at the time for one guinea each.

In 1977 we cast replica bells for the Silver Jubilee of HM Queen Elizabeth II, some being silver in colour, although there were fewer cast of these.

The last of these bells to be made were in 1981 when Gillett’s cast bells in commemoration of the wedding of Prince Charles & Lady Diana.

For more information about Gillett & Johnston Coronation Bells please call us on 01883 740000 or, if preferred use the contact form.