The 24th October 2013 is United Nations Day and will see the 63rd anniversary of the Freedom Bell being installed in the Rathaus Tower, Schoneberg, Berlin as a gift from America to Berlin. 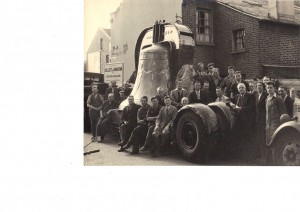 Gillett & Johnston Employees with the Freedom Bell at the Croydon Factory

The 10 ton Freedom Bell was cast by world renowned Clock & Bell Makers Gillett & Johnston (Croydon) Ltd in their 5 acre Croydon site.  The bell was a labour of love and not only were all Gillett’s employees fiercely proud of the Bell but the whole town of Croydon was equally proud with everyone referring to the bell as our Bell.  The bell stands 9 feet tall and was cast in copper and Cornish tin.

The bell was gifted by America as a symbol of liberty.  The words on the rim of the bell bear a Para phrase of Lincoln’s Gettysburg address ‘That This World under God Shall Have a New Birth of Freedom.’

The bell was designed by Walter D Teague of New York.  Mr Artie Brown one of Britain’s most famous sculptors, accompanied by his wife, a sculptress came to Gillett’s and worked day and night for a week making the figures on the bell represent the continents which took part in the Second World War.  The 5 continents being Europe, Asia, Africa, Australasia and America each had a male figure to represent there continent all with outstretched hands and joining arms.  The hands hold torches symbolizing freedom and above the figures is a circle of laurel leaves denoting peace.   For the head that was to represent Europe the sculptor modelled the face of King George the 6th from a shilling.

There was a short timeline in which to get the bell completed so the staff worked night and day.  The casting alone took 3 days and three nights.  Director Michael Howard tuned the bell himself and slept on a camp bed in case he was needed during this time.  On July 27th 1950 American Ambassador, Lewis Douglas visited Gillett’s in an impressive ceremony to watch the molten metal for the bell flow into the mould.  A few moments before casting the American Ambassador dropped into the mould a small lapel badge, the emblem of the American “Fight for Freedom” an organisation he helped to establish in 1940 to “persuade my people that it was our war too.” 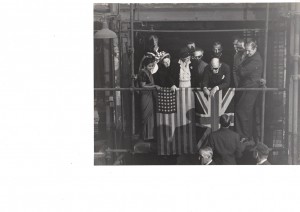 Gillett & Johnston Freedom Bell Casting Ceremony.  Mrs Brown is on the Left, Mr Lewis Douglas the American Ambassador is the gentleman in the middle with the eye patch talking to Michael Howard the Director and far right Mr Bill Dyer the Foreman.

Before tuning the bell weighed 12 ton but 2 tons were removed perfecting the sound.  The tuning of the bell was carried out by Farther and son employees of Gillett’s.  The Bell was then tested by being rung for 2 days almost continuously.  Mothers from the surrounding area came to complain that their children could not sleep but on being explained about the importance of the bell they supported Gillett’s and presumably put up with tired children.

On 26th August the bell left the factory in Croydon where workers and residents of Croydon came to see the bell off on her journey to the London Docks before being shipped to New York, USA for a crusade for freedom tour.

The bell was taken on a crusade of Freedom around 21 America cities by its sponsors, the crusade for freedom before being installed in the heart of Berlin in the Rathaus Tower, schoneberg.  Where she still resides to this day. 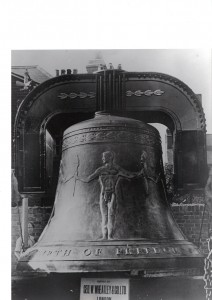