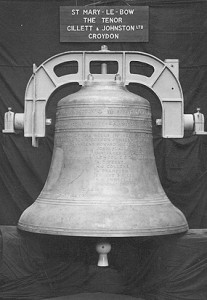 In 1909 Selfridge’s opened its doors for the first time and by the 1930’s Selfridges was the largest retail group in Europe.  To celebrate its 21st birthday a new clock was commissioned.  The Queen of Time was installed in 1931 along with 5 Gillett bells.

What is not so commonly known is the friendship that developed between Gordon Selfridge and Gillett’s own Cyril Johnston.

The friendship was very profitable for Gillett’s especially when a contract for the restoration of twelve famous bells came up.  These bells were for St Mary le Bow church in Cheapside and the bells were the famous Bow Bells dating back to 1738.  According to tradition a true cockney must be born within the sound of Bow Bells.  The bells are also the reason Dick Whittington returned to London when he heard them ringing out.  The famous nursery rhyme Oranges and Lemons also mentions Bow Bells “I do not know says the great Bell of Bow”.  Incidentally the sound of Bow Bells is now being drowned out by London’ noise pollution as according to the Daily Mail on 26 June 2012.  Apparently the street noise is twice as loud in London as it was 150 years ago.

Bow Vestry was the committee set up in 1931 to manage the restoration of the 12 bells.  The committee asked for 3 foundaries to submit quotes for the work but when the quotes came in it became apparent that the £15,000 needed for the restoration of the bells was a difficult amount to raise in a country in recession after WW1.   At a 1931 committee meeting a letter was produced from Cyril Johnston along with a letter he had enclosed from an anonymous American offering to pay for the entire restoration of the bells on condition that the work was carried out by Gillett & Johnston.    The job was awarded to Gillett’s and Selfridge’s came forward as the anonymous donor.  There was a lot of controversy surrounding the awarding of this job to Gillett’s due to what was considered underhand tactics and the fact that Cyril Johnston used a new method of tuning bells.  A method which would see him awarded with an OBE in 1948.

The G&J peel was dedicated on 7th July 1933 by the Archbishop of Canterbury.  The event was a nationwide celebration with 300 ringers from around the country coming to Cheapside.  Selfridge had his name inscribed on the newly recast tenor bell and through a lavish tea to celebrate in his store and Gillett’s had their own celebration at the foundry in Croydon.

Sadly on the 11th May 1941 German bombs destroyed much of St Mary le Bow and the Gillett bells crashed to the ground.   The bells were re cast in 1956 and ringing resumed in 1961.  Due to the controversy surrounding the Gillett’s recasting of the Bells all mention of Selfridges and the recasting in 1931 by Gillett’s was left out of the bells inscription.